Healing Old Wounds: A story from Synchronicity, Science, and Soul-Making

Healing Old Wounds: A story from Synchronicity, Science, and Soul-Making

This happened twenty-one years ago, four weeks after the birth of my first son. I was a twenty-nine-year old graduate student living in an idyllic cottage on Cayuga Lake. My wife and I were luxuriating in being parents, our healthy new son was greedily nursing, and the fall leaves swirled around us with vibrant colors.

In two successive nights I had very similar dreams of my father. I had never dreamed of my alcoholic father in my life, nor have I since. He left me as an infant and had almost no contact with me. My mother lovingly raised me entirely by herself and remarried when I was twenty-one. In my mother’s eyes he was justifiably evil incarnate. Occasionally when she was at the height of her anger because of some bad behavior of mine she would say, “You’re just like your father!” This was the nuclear weapon of curses. 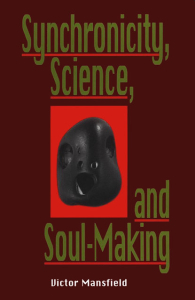 Both these vivid dreams portrayed my father in a very favorable light. In the dreams he told me that he was a sensitive and poetic person who found it impossible to live with my headstrong, aggressive mother. He claimed that it really was not his fault that he left. The two successive dreams seemed very peculiar to me, especially since they were so alike. I attributed them to my becoming a father, but they were still mysterious.

The day after the second dream, my father’s brother called me on the telephone; a real shock, since I had nothing to do with anyone in my father’s family and had no contact with them for fifteen years. He told me my father was dying in a Veterans Administration Hospital in Washington, DC and that I should go and visit him. I immediately blurted out, “Would he come and see me if I were dying?” I told my uncle I had no interest in seeing him now after all these years.

I hung up the phone. Rage, bitterness, and self-pity enveloped me like live steam. Where was he when I needed him? How come I had to take my mother’s brother to the father and son banquet when I got my letter in high school football? How come my most vivid early memory of him was his stumbling into my mother’s apartment and vomiting explosively all over the walls in the bathroom? Ferocious fights between my father and mother, face scratching, me standing there in helpless fear saying, “Mommy, I’ll get you my hammer to hit him . . . “-all this washed over me. That rotten bastard! No, he made me a bastard! He cheated me of a normal childhood. He would not even pay the $5.00 per week of child support awarded by the divorce court. Maybe the half-brother I had never met, sired while he was married to my mother, would visit him in the hospital. How embarrassing it was to be investigated by welfare workers to see if my mother and I were eligible for aid. After all those years of telling people my father died in World War II, that stupid bum writes my high school and asks how I am discharging my military obligation. He never even sent me a Christmas card! Why did he screw me up like that? Let the son-of-a-bitch die by himself as he deserves!

I wandered around all that beautiful fall day with hot tears streaming down my face, alternating between bitterness and sadness. Gradually I became torn about whether I should see him after all. I started thinking how good it would be to tell him he was a grandfather.  I didn’t know what to do. The battle raged. I had been reading some Jung and experimenting with the I Ching. I consulted it in desperation. The hexagram “Gathering” came up. Part of the interpretation reads, “The family gathers about the father as its head.” I was dumbfounded! That hexagram, plus the dreams, decided it for me. I realized there was something bigger operating than just my fury and self-pity. We all piled into my little car and sorrowfully drove to Washington, DC.

The intensive care nurse asked me if this man was my father. I confessed, with embarrassment, “I don’t know.” In fact, that ashen gray man with tubes running into his head was my father. I told him who I was and that he was a grandfather. He said, “When I get better I’ll make it up to you.” He was always making alcoholic promises he could never keep right to the end. I wept for him, for me, for my mother, for the family that never was. I wiped blood oozing from his mouth. I felt him suffer and watched my bitterness and self-pity dissolve in sadness for us all. I said a tearful good-bye and never saw him again, since he died in a few days. Nor did I ever again feel that bitterness and anger toward him. Yet those old wounds still bleed a little.

The night after that hospital visit I dreamed of a beautiful old black car from the nineteen-thirties carrying me up a stream bed behind my maternal grandfather’s house. I remember the house from living there in my infancy. Although I could make no sense of this short dream, I felt very comforted by it. I always remembered the feeling of it and wondered what it meant. Twenty years later, among the half-a-dozen pictures containing my father, I saw that beautiful black car. In my childhood I had seen that picture a few times. (See the photograph.) My father stood in front of it with his left foot on the running board and me cradled in his arm. That handsome young man seemed to beam with pride and affection for me-and perhaps some anxiety about his looming responsibilities. That is the only picture I have of me and my father.

What does it all mean? Certainly my bitterness about my father needed to be overcome, both for my sake and that of my family. Although my life has been very good, there was a hard knot of rage, hatred, and shame that was poisoning me. It had to be dissolved.

There is another dimension. Through the genuine need for self-reliance and as a defense against my pain and vulnerability I had built some real armor around me. Through time the wounds of my childhood had largely healed, but at the expense of a large build up of hard scar tissue, a sort of encasing shell. The wounds were reopened and the armor was cracked by directly experiencing my loss and my father’s suffering. Thanks to the preparation of the dreams and the urging of the I Ching, the wounds could heal more thoroughly with less hard scar tissue. The curious thing about armor is that it keeps the outside world from harming you, but it also prevents you from expressing much tenderness or from letting the world in. All in all, it’s a heavy burden to carry around.

Of course, the experience made me question my relationship to the world. What in me “knew” my father was dying? What knew that my encrusted bitterness needed softening through those extraordinary dreams of my father? How can coins “randomly” thrown connect so meaningfully to my psychological state then? I only have partial answers to these questions, but they will not go away.

Later, when I spoke to my teacher, Anthony, about this experience, he only said, “Unless we can learn to forgive others, we’ll never forgive ourselves.” Perhaps that is the best lesson.