A Personal Exploration of Science and The Sacred 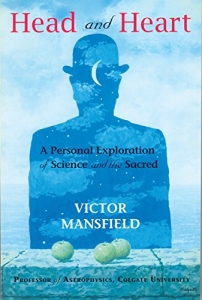 This unusual book tells the story of an astrophysicist’s search for meaning from psychological, philosophical, and spiritual points of view. Mansfield weaves personal memoir with clear scientific discussion and quotes such famous thinkers and writers as Steven Weinberg, Jane Goodall, Joseph Campbell, C. G. Jung, Nelson Mandela, Robert Frost, and the Sufi poet Rumi. In plain language, Mansfield explores radio astronomy, the nature of time, relativity, cosmological expansion, and quantum mechanics with personal examples of meditation, dreams and synchronicity to show that spiritual experience offers a fundamentally different window into reality than that given by science. And he tackles these questions: What is invisible matter? Am I merely a complex tangle of atoms and molecules controlled by the laws of physics? What is the nature of soul? How is modern science a form of religion? You will be charmed by Mansfield’s anecdotes to dramatize his own struggles with such questions. In a culture where the relationship between science and spirituality continues to be strained, he offers hope for a higher synthesis that embraces dissenting worldviews and encourages compassionate action in the world.

In this deeply personal account, Prof. Victor Mansfield invites us to a wedding of head and heart, science and spirituality. This work shows how he has brought about a remarkable union of the astronomical and the psychological, which retains the integrity of both partners while joining them in a single state of integrated consciousness. It is an impressive achievement.

A remarkable man has written a remarkable book. Here is the story of his ongoing quest to reconcile his head (what he perceives and how he thinks about it) with his heart (his intuitive feeling.) He deals with the same quest in terms of humankind’s two great enterprises – science (what is) and religion (what is of value.) Firmly taprooted in science (astrophysics) yet attenuated toward the spiritual heavens, the author is uniquely qualified to grapple with the almost overwhelming task of reconciling these viewpoints. Vic Mansfield presents the best discussion I have seen of how science can easily become a religion of scientism, which, like the medieval Church, imposes uniform beliefs, stifles dissent, and excommunicates “heretics.” But, seen in their purest form, science and religion are two paths up the same mountain. I highly recommend this book to all intelligent, open minds.

This book’s unification of Jungian depth psychology and modern physics is contemplative scholarship at its finest, showing the luminous results of combining scientific inquiry and examining one’s own consciousness.  Mansfield’s riveting stories illustrate how the insights of astrophysics, cosmology, and depth psychology are directly (and often humorously) relevant to the pressures, pleasures, and paradoxes of daily living and human relationships. If you are looking for an exhilarating journey from cosmology and individuation to yoga and scientific knowledge, you have come to the right place.  Here is a foundation for the science of the new millennium.

This is a beautiful and inspiring book.  For Mansfield, a professional scientist who is also deeply committed to spiritual self-transformation, the difficult relationship between science and religion is more than just a theoretical problem.  It is a matter of urgent personal and social concern, and here he generously shares the experiences, encounters, and reflections of several decades of involvement in it.  Every topic Mansfield touches—whether astrophysics, Jungian psychology, or mystical philosophy—is informed by deep reflection and intimate personal experience.  Whether sitting in an Indian temple in the presence of a world-renowned spiritual leader or reminiscing about his high school teachers and his own misdemeanours, Mansfield knows how to draw wisdom from the situation—a wisdom that is as grounded and human as it is spiritual.  What a delight it is, too, to find such controversial topics as parapsychology, astrology, synchronicity, and spiritual experience handled with so much intelligence and fairness.  Mansfield is a gifted teacher and can convey even the most difficult scientific or philosophical arguments with luminous clarity.  His vivid anecdotes and ingenious analogies continue to resonate long after one has finished reading them.  Cautious yet open-minded, rigorous yet teeming with colour and life, this book unostentatiously exemplifies its own ideal of creatively alternating the perspectives of the head and the heart.  Would there were more books on religion and science as candid, as heartfelt, as intelligent, and as courageous as this one.

Dr. Roderick Main
Lecturer in Psychoanalytic Studies, University of Essex, England
and editor of Jung on Synchronicity and the Paranormal.

Inspired by Carl Jung’s insights into the balancing of opposite tendencies in the human psyche, Mansfield does a brilliant job of comparing and contrasting science and spirituality as alternative paths to the understanding of reality, and explaining the adverse consequences of leaning too heavily on one at the expense of the other. Extensive references to his own life experiences and metaphorical examples help make the book both engaging and understandable for the general reader as well as the scholar.

Victor Mansfield is a pioneer and a map-maker every bit as much as, say, Lewis and Clark.  The realm of his exploration is terra incognita, connecting the upper reaches of science and the sacred.  Rigorously trained in both disciplines, he offers us a travelogue that is both personal and paradigmatic.  Though intellectually challenging, this book is eminently readable.  With every page, my admiration grew for the author’s keen mind, for his personal candor, but most of all for his explorer’s courage.

Victor Mansfield’s book is a great illustration of combining the head and the heart. The whole field of Science and the Sacred is an extremely important one for our age and this book is a passionate plea for engaging in the existentially difficult, but very rewarding, task of bringing the objective knowledge of science into harmony with the interior experience of spiritual truths. What the readers are called to struggle with in their own lives is the monotruthism of both religion and of science which behaves, in Feyerabend’s words quoted by Mansfield, as ‘the most recent, most aggressive, and most dogmatic religious institution.’ Highly readable and highly recommended.

Professor Ravi Ravindra
author of Science and the Sacred

Many authors have attempted to represent the interface between Science and the Sacred, most of them via rhetorical speculations largely devoid of technical credibility. A few others have brought more scientific rigor and objectivity to the task, but have been incapable or unwilling to allow subjective experiences into the analysis. In Professor Mansfield’s book we have a rare and precious effort to deploy both his strong scientific experience and his sincere personal struggle with the sacred in a beautiful complementarity of both the philosophical substance, and the pedagogical style of the text. It is a complementarity that is in fact essential to any significant progress toward comprehension of this most profound and enduring of all human issues: the role of the spirit in the dynamics of life. Not all scientists will accept this thesis, nor will all religious dogmatists, but in courageously sharing the colloquy between his own mind and heart, Professor Mansfield has provided a stimulating resource for all who sincerely yearn for better integration of their spiritual and intellectual identities.

Vic has written a bold and accessible book in which he shows how he has tried to integrate head and heart in his own life and challenges readers to do likewise. The book shares the 2002 Scientific and Medical Network Book Prize.

A review of Head and Heartcan be found at Word Trade.