Introduction by His Holiness the Dalai Lama 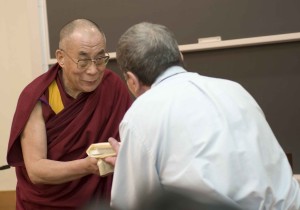 I have a deep interest in the close relationship between modern science and the study of the inner dimensions of the human mind.  This is because we live in a physical world.  We have a physical body and a mind, the two of which are closely interconnected.  In fact, it is our experience of physical sensations and emotional responses as a consequence of these circumstances that make us sentient beings.  Nevertheless, if we compare the physical and mental influences upon our lives, it is clear that physical pain can be subdued by strength of mind; therefore, mental happiness and satisfaction are ultimately more important to us than physical discomfort and unhappiness.  This is one of the reasons why spirituality, attention to our inner dimension, is so important.  On the other hand, if someone is mentally unhappy, simple physical comfort does not relieve their mental distress.

However, despite their achievements in many fields, we have not yet found a way to use science and technology to eliminate the worries and unhappiness that trouble so many people.  Indeed, I think the basic remedy for mental trouble by nature lies within the mind itself and the potential for really solving problems of the mind only exists on a mental level.  Therefore, while we certainly need science and technology, we also need a sense of spirituality, including ways to cultivate the warm heartedness and compassion that underpin our basic happiness.

Until recently, these two fields, science and spirituality, have remained distant and apart from each other.  But I believe this is changing.  For example, although I am a Buddhist, if I were to cling only to Buddhist teaching and deny what modern scientific findings prove, I would believe that the world was flat, at the centre of the universe and that the sun and the moon go around it.  Clearly, if I were to adopt an extreme stance and only consider what the scriptures say, keeping my distance from science, then I myself would suffer, not least due to a lack of knowledge.

The Buddhist tradition, particularly the thousand-year-old tradition of the Indian University of Nalanda that we inherited in Tibet, is concerned with trying to know reality, various levels of reality, through investigation, avoiding the pitfalls of underestimation and exaggeration.  Modern science too is concerned with discovering reality, not only in theory, but also in practice by conducting repeatable experiments.  Whether we approach reality through science or through a spiritual path, we have to accept it as it is.

Victor Mansfield, whom I have known for many years, is someone who has reconciled his professional involvement with science with a deep interest in spirituality and Tibetan Buddhism in particular.  He has taught and written widely about both.  In this book, he has set out specifically to show how religion and spirituality are compatible with life in the modern world.  I am grateful to him for responding to my appeal for people who have such knowledge to share it with others.  In today’s world, we no longer live in the kind of isolation that allows us to dismiss views that are different from our own, for to do so can only be a source of conflict.  Our increasing interdependence requires that we try to understand and appreciate other points of view. Readers will surely be rewarded by the light this book shines on the corresponding, but quite different, approaches to reality taken by Tibetan Buddhism and modern physics.